At the end of January, I spent a few days in Kraków, Poland, for my research. At the Jagiellonian Library, I was given permission to study several volumes from a series of albums, the Libri Picturati A 16–30. Many of the albums are digitized and the images available on the library website for anyone to explore.[1] This collection of watercolors, although not the main subject of my projects, has been important to both my MA and PhD research. Needless to say, it was quite a significant and exciting occasion to be able to examine and study the albums in person.

However, as I went through the leaves in a state of exhilaration, I was quickly confronted with one of the biggest challenges of my research: the imprecise dating. The institutions that hold the flower books I have studied usually give a range of dates instead of a specific year for the dating of the albums. The relatively large number of leaves (from several tens to several hundreds) means that most collections of watercolors would take years to compile. Some collections continued to grow even after the death of the first collector, if they were acquired by new owners. Thus, it is not surprising to see a flower book with a date showing “c. 1650–1670.” With the Libri Picturati A 16–30, however, the situation is much more complex.

The Libri Picturati A 16–30 is a collection of more than 1,400 watercolors that, for the most part, contain images of plants. Despite being recognized as one of the largest and most paramount European image collections of early modern natural history, many basic questions remain difficult to fully answer. Who was the first collector(s) of this series? Who painted the watercolors? When were the images made? All these questions, and many more, are still open to debate.[2] In general, it is mostly accepted that the Libri Picturati A 16–30 was compiled during the second half of the sixteenth century. The collection came together as a collaborative effort, with the Moerkercke aristocrat Charles de Saint Omer as the collector/patron, the renown Renaissance botanist Carolus Clusius as the advisor, and the painter Jacques van den Corenhuyse (and possibly Pieter van der Borcht) as the principal artist for the watercolors.[3]

The plants that are depicted in the Libri Picturati A 16–30 are diverse, including medicinal plants, kitchen herbs, fungi, ornamental plants, among others.[4] Most of the plants are accompanied by hand-written annotations of their early modern plant names in different languages. Many of the watercolors might have been the visual sources for the woodcuts that illustrate the treatises written and/or compiled by Clusius and his fellow botanists, Rembert Dodoens and Matthias Lobelius, in the Low Countries.[5] Since my current project is on watercolors of garden flowers, the albums I studied (A 21, A 22, and A 25) have ornamental flowers as their primary focus.

Going through the albums, two leaves from volume A 22 particularly drew my attention. The flowers in Fig. 1 and Fig. 2 are both identified as Hemerocallis fulva by modern botanists, but the flowers are depicted in rather different manners.[6] Fig. 1 shows all parts of the plant, including roots, leaves, buds, and a bloom. The stem is creatively folded into three parts to fit the entire plant into the composition. Even though the size of the watercolor is much smaller, the proportion of the plant is not too far off from a Hemerocallis fulva in real life. Fig. 2, on the other hand, eliminates most of the plant information, featuring only the buds and the blooming flower in greater details. 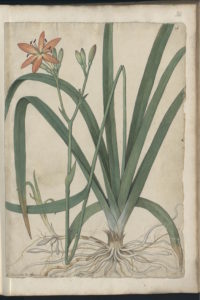 The material qualities and techniques used in the two watercolors also differ, despite the fact that the paints on both leaves resemble more to gouache (or body color) in modern term because the colors are opaque. It should be emphasized that the observations below bear no value judgment on their aesthetics. Compared to Fig. 2, Fig. 1 is slightly more transparent, less saturated and vibrant. There is less contrast and range of hues to render the plant in Fig. 1, and hence it looks flatter than the volumetric flower in Fig. 2. The graphic quality of Fig. 1 is enhanced by the bold black line around the flower and the buds; whereas the image maker of Fig. 2 used a darker shade of red-orange to contour the petals of the bloom. These (subtle) hints of different hands are abundant throughout the three volumes of the Libri Picturati A 16–30 I examined.

Stylistically, the way the Hemerocallis fulva is pictured in Fig. 1 is close to many of the woodcuts that first appeared in sixteenth-century herbals, whereas the way of representing the flower—as well as the materials and techniques—in Fig. 2 is highly similar to the mid-seventeenth-century flower books I have been studying for my project. As mentioned, the majority of the watercolors in the collection can be traced back to the second half of the sixteenth century, but the binding of the albums is dated circa 1660s or a little later.[7] It may be possible that Fig. 2 was commissioned and added to the collection decades later by the next collectors who acquired Saint Omer’s watercolors in the seventeenth-century.[8] With the watermarks of the two leaves providing no further clues, as they are common ones used between the last quarter of the sixteenth century and the beginning of the eighteenth century, this small investigation of when they were made has to stop for now.

As usual, I walked out of the study room at the Jagiellonian Library with more questions than walking in. How to further untangle this immense collection to get more precise dating on individual leaves? Is it necessary at all to know the precise dating? How does having such specific information increase our understanding of the Libri Picturati A 16–30, or of watercolors in flower books in general? I do not know yet, and all I can do is to keep digging.

[3] This is the interpretation provided by one of the most critical secondary literature on the Libri Picturati A 16–30, see Jan de Koning, Gerda van Uffelen, Alicja Zemanek, and Bogdan Zemanek, eds., Drawn After Nature: The Complete Botanical Watercolours of The 16th-Century Libri Picturati (Zeist: KNNV Publishing, 2008), 17–19.

[4] Studies of these different groups of plants from botanists’ perspective are also included in De Koning, Van Uffelen, Zemanek, and Zemanek.

[5] The printing blocks for these images are preserved at the Museum Plantin-Moretus in Antwerp.