Throughout my PhD project thus far, and particularly since I started the historical remaking aspect of my research, I have constantly asked myself, “Am I having too much fun?” Often, the hands-on research does not appear to be work. I frequently experiment into late evenings because it is too exciting to stop exploring the material potentials of historically-oriented pigments and dyestuffs, despite the boredom, pain, and frustration that occasionally accompanies the processes. I have wondered if all this is children’s play instead of serious research, as most of my experiments do not intend to answer specific questions. However, why can research not be fun and serious simultaneously? Why, generally speaking, do we tend to separate fun explorations from hard work?

Logwood is one of the materials that has captivated me. The plant was commonly used for textile dyeing in the early modern period, but much less so for painting.[1] Similarly, the first time I encountered this plant material was during a workshop for reconstructing late medieval and early modern black dyeing technologies, for logwood red was the base color for one of the black dye recipes. Compared to other dyestuff, such as Brazilwood, logwood appears much less frequently in recipe books or manuals for historical watercolor. The main thing I was most curious about, however, is that blue dye can be obtained by altering its PH level. Can this dye make a blue lake pigment? To see what happens, I purchased some logwood shavings and substituted the Brazilwood in a recipe for making a red lake pigment with the same amount of logwood. The result was a deep purple pigment (Fig. 1). 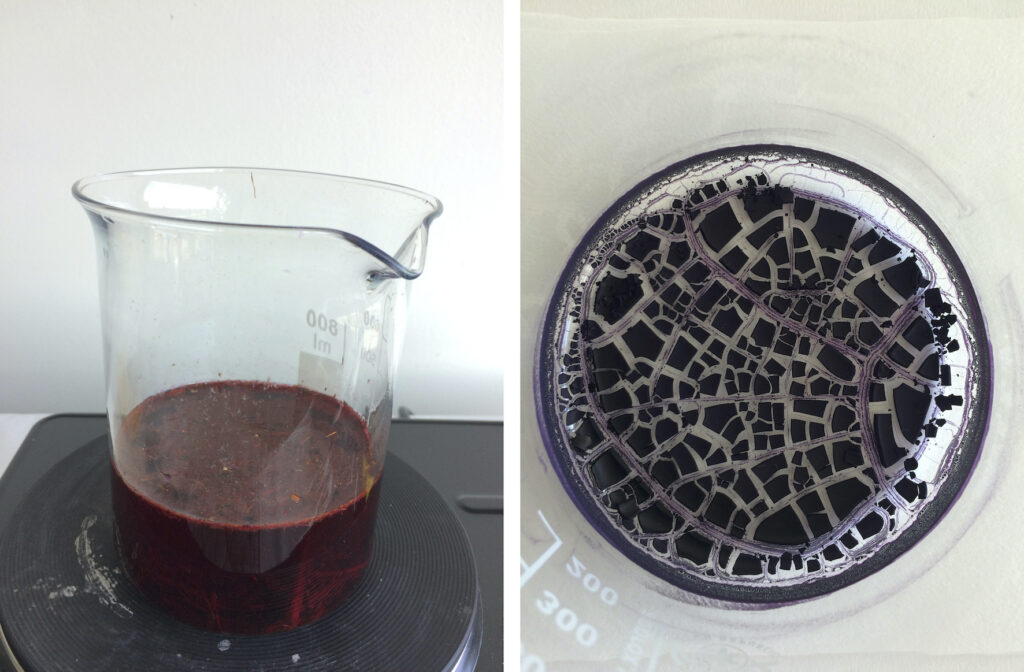 Given that blue can be a vague term throughout history that sometimes covers colors in the violet spectrum, it was not entirely “out of the blue” to obtain a purple pigment. What was interesting, however, is that the excess dye was still so saturated that it was difficult to spot the pigment (Fig. 2). Usually, after adding the substrate (mostly alum, but sometimes chalk or other powdered materials) to the dye and letting the mixture settle overnight, the dyed substance would sink to the bottom of the container. The substrate normally absorbs most of the colorant, leaving the dye a clearer liquid than it was (Fig. 3), which can then simply be tossed out. The excess logwood dye was so deep that throwing it away seemed to be a waste. What would happen if I made pigments by using the excess to dye multiple batches of substrate? 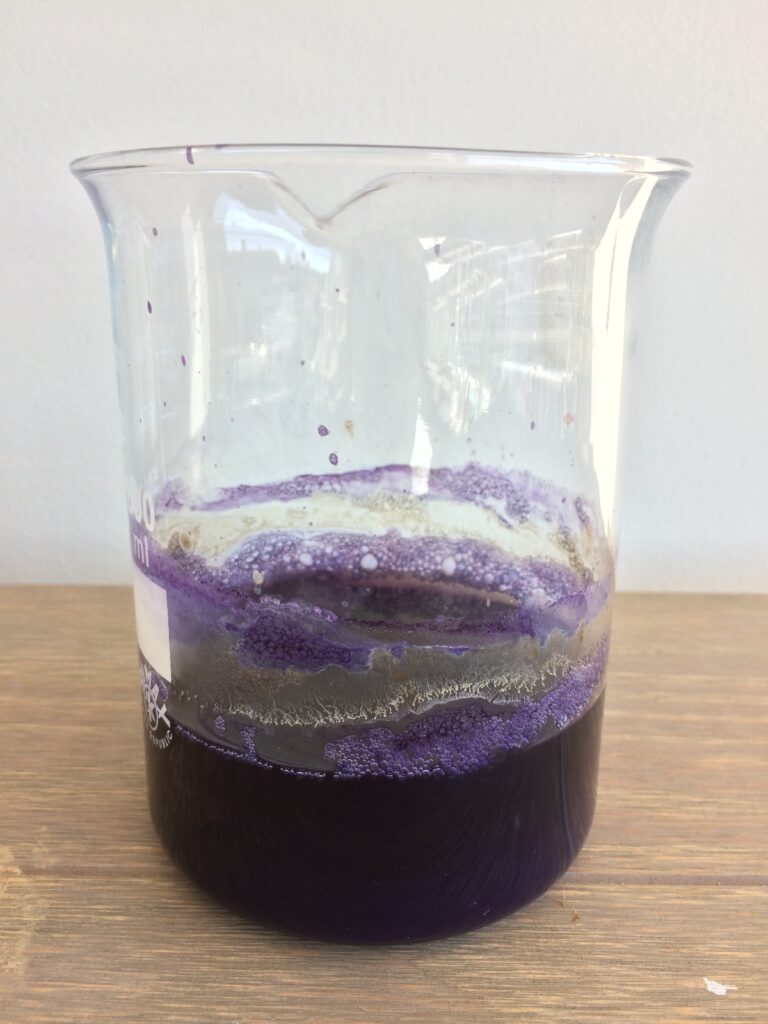 Fig. 2. Logwood lake pigment with highly saturated excess dye that the particles are not easily seen. 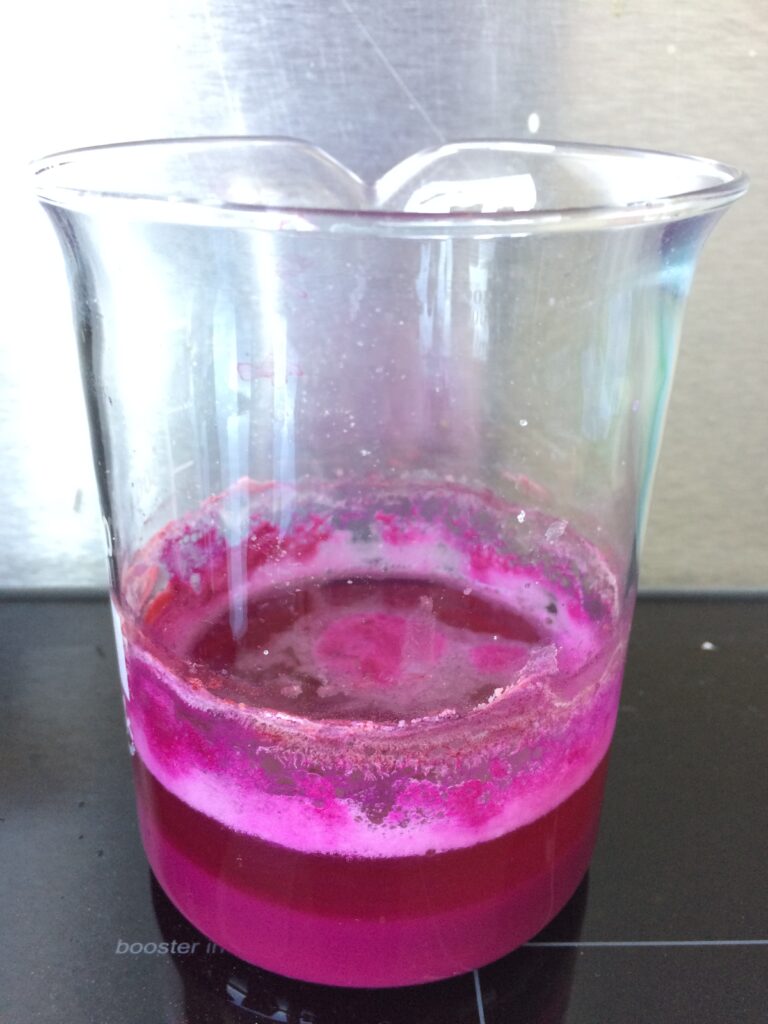 I prepared another logwood dye bath following the same recipe two weeks after the first experiment, and made the first batch of pigment (Batch A). The next day, I filtered and washed Batch A, and left the pigment to dry. The excess from Batch A became the dye for Batch B, the excess from Batch B became the dye for Batch C, and this process was repeated many times. After the eleventh time (Batch L), the excess was still darker than anticipated; I added chalk instead of alum into the dyebath for the last batch of pigment (Batch M) and produced thirteen batches of pigment from one dye. The idea was that each batch would be a tint lighter than the previous one. The results (Fig. 4) were not as quite straightforward, but the later batches are indeed lighter than the earlier ones. How about the quality of these pigments? Despite the nice range of purples in appearance, most batches are low in quality. The particles are coarse, and the lighter colors ones turn dull when bound with gum water (Fig. 5). 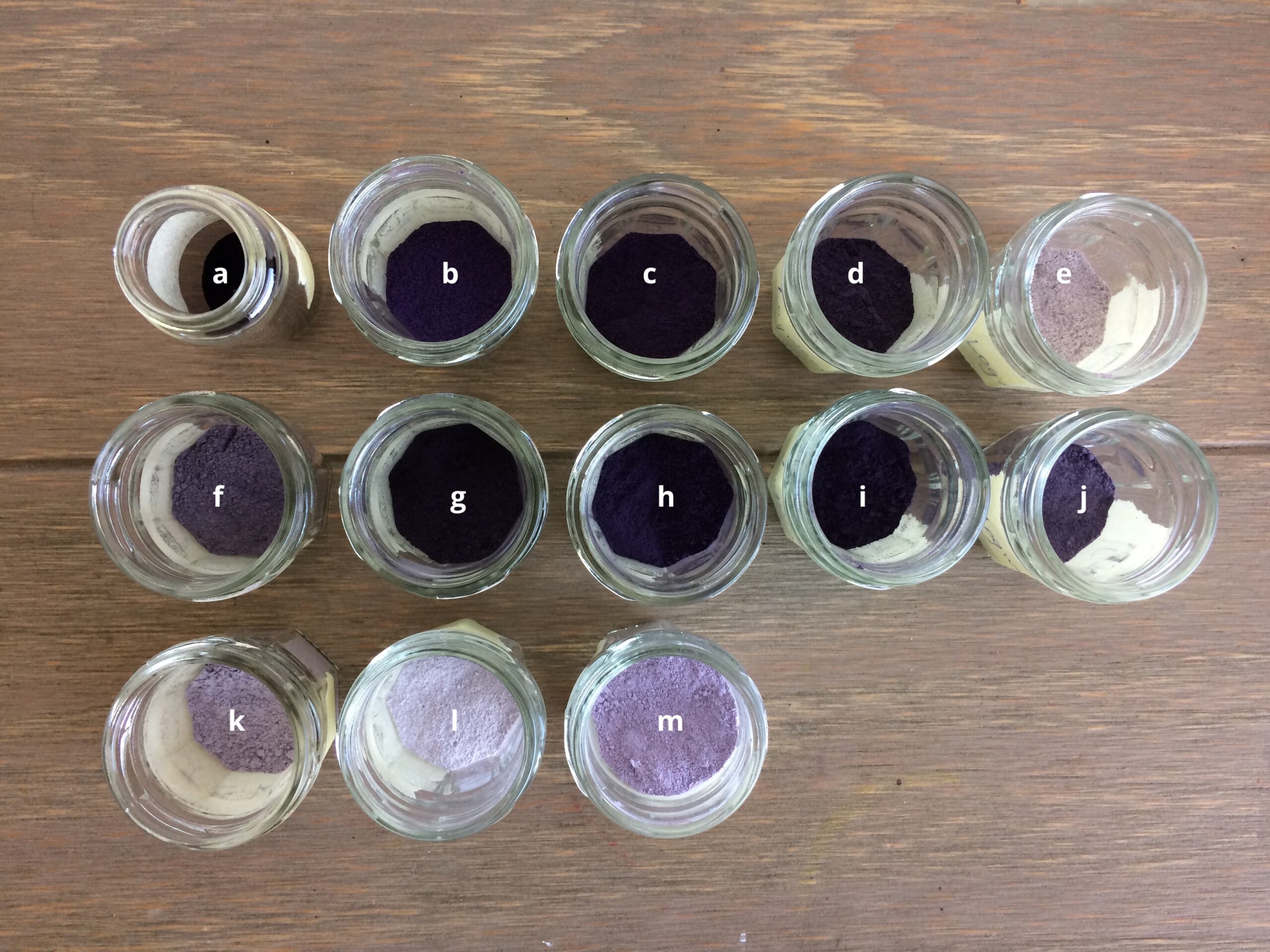 Fig. 4. Thirteen batches of logwood lake pigment from one dye. 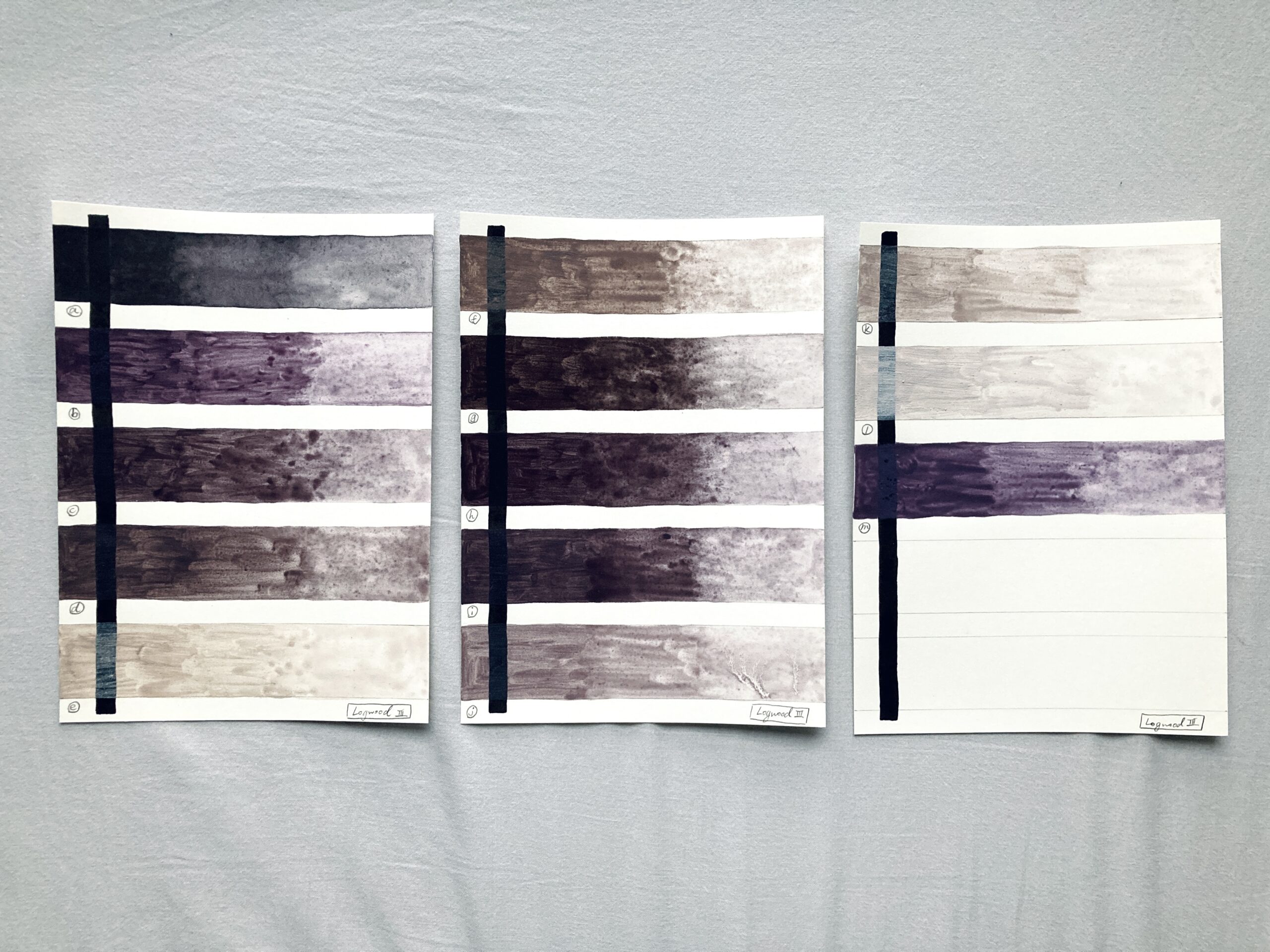 This string of logwood experiments has no concrete historical base in text nor practice. They were entirely driven by curiosity and the mindset of “what if.” As excess is not a proper dye that can produce quality, or even usable, pigment, the second experiment was impractical. However, the amazement and curiosity elicited by the (plant) material is perhaps worth mentioning. The early modern curiosity-collecting culture—as seen in the Kunst- und Wunderkammern filled with natural and manmade material objects throughout Europe—was a big part of knowledge production of the period. Early modern alchemy shared a different kind of enthusiasm towards materials in their transformation and application. The empirical and heuristic processes of knowledge production became relatable on a personal level through the logwood experiments.

By now, knowledge production has developed so much that we can easily explain the phenomena that were considered “wonders” in the past. While it is unequivocally important to know the historiography and updated understanding on the subject for good research, I sometimes ponder if several centuries of reasoning has made it difficult for many of us to remember that small but fundamental curiosities, often coupled with wonderment, have been a critical part of knowledge production. The fun explorations during my historical remaking research have been particularly instrumental in making me rethink the emotional side in the pursuit of knowledge throughout history.

At the end of this series, and especially throughout this last blog post, you may have noticed that I have asked many big and small questions. Some of them were followed by an answer or explanation; some of them became more complex questions; and some of them led to absolutely nowhere. This is reflective of my process of applying historical remaking as a research method. If I were to summarize my past year with hands-on research in one word, historical remaking means possibilities for me. It means the possibilities to observe, to engage, to appreciate, to be amazed, to understand, to confront, and to question historical (practical) knowledge production through bodily gesture. The experiments are similar to collecting sources in archives, libraries, and museums, and follow-up digestion and analysis is required. With more experimentation and contemplation down the road for my dissertation, the work continues.

1 thought on “Making Colors (8): Fun and Curiosity in Historical Remaking”