When I was in art school for my illustration program, my faculty mentor, who remains a positive influence, once told me that he was concerned about my working process. He said that my final illustrations showed dedication and continued to progress, but I seemed to have little fun with the process. For the longest time, even many years after getting my bachelor’s degree, I could not understand why he made that comment. I was serious about my illustrations, and I took the courses to learn and improve my skills, but not to have fun. It was not until now that I realized what he meant was that my practice samples lacked a curiosity to push the boundary of the materials and techniques. The pressure to be “successful” with my final pieces made me execute my illustrations in a careful and controlled manner. Even if I might have wondered about the potentials of the materials and techniques, I was not willing to “fail” for my curiosity.

It would be redundant to reiterate the value of failure, as a quick search in a library catalogue or through a web browser would bring a wealth of literature on this topic in every field. However, it is apparent that we are experiencing a much higher acceptance of and more open and honest discussions about failure in our own time of knowledge production.[1] Learning from my previous experience and encouraged by this current, I find my curiosity outweighing the desired results and performances this time as I head into the second year of my dissertation project. The theme of this year’s investigation focuses on the materiality of early modern watercolors through making botanical illustrations with materials and techniques that are as close to historical practices as possible. As one can expect, historical pigments, paints, brushes, painting surfaces, among others, are not readily available in simply any art supply store; it will take some time and capital to procure all the items.

But I was eager to start making something, so, while assembling my supplies, I remade some white ink to familiarize myself with early modern recipes. The recipe I followed (Fig. 1) was from a seventeenth-century (1615) English version of Alessio Piemontese’s De’ Secreti (1555).[2] This book of secrets was translated into several languages and largely circulated throughout early modern Europe.[3] From distilling to dyeing, from making pigments to making perfumes, De’ Secreti provides recipes to instruct readers on a wide range of how-to’s. There are several recipes on ink and other relevant things for writing. The white ink recipe is comparatively unusual, as it is not a typical color one would associate when discussing writing in the early modern period. The whole process—including the initial reason to select this particular recipe and the following steps to rework it—was full of mistakes, errors, and failures. 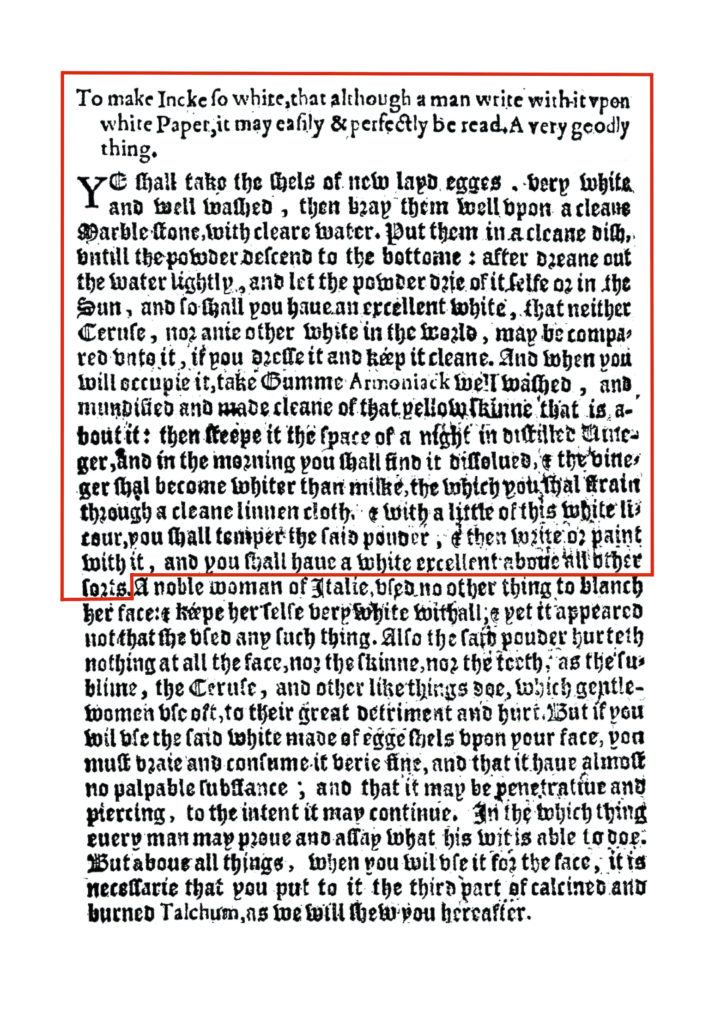 Fig. 1. Recipe of a white ink from The secrets of Alexis (London, 1615). Originally printed on pages 96 recto and 96 verso, digitally combined by the author to allow easier reading. Below is the transcription in modern English spelling of the instructions followed for the experiment. Text outside the red box describes applying the eggshell powder as makeup, which was not tested for this remaking.

To make ink so white, that although a man write with it upon white paper, it may easily & perfectly be read. A very goodly thing.

You shall take the shells of new laid eggs, very white and well washed, then bray them well upon a clean marble stone, with clear water. Put them in a clean dish, until the powder descend to the bottom; after drain out the water lightly, and let the powder dry of itself or in the sun, and so shall you have an excellent white, that neither ceruse, nor any other white in the world, may be compared onto it, if you dress it and keep it clean. And when you will occupy it, take Gum Ammoniac well washed, and mundified and made clean of that yellow skin that is about it; then steep it the space of a night in distilled vinegar, and in the morning you shall find it dissolved, the vinegar shall become whiter than milk, the which you shall strain through a clean linen cloth, with a little of this white liquor, you shall temper the said powder, then write or paint with it, and you shall have a white excellent above all other sorts. […]

I first came across the white ink recipe through a friend, when she once mentioned that she was experimenting with turning eggshell into a white pigment. Thinking that eggshell is one of the most available ingredients and safe to work with as a beginner, I thought it would be a sensible recipe to try. However, I soon realized that the recipe she gave me included only half of the entry. Upon further reading, I also learned that eggshell was not commonly used as a white pigment, even though it was used in artistic production for other purposes.[4] After obtaining a digital copy of the 1615 English edition of De’ Secreti and going through the entries until I found the full recipe, I finally had a complete picture of what I was remaking. The mistake of not checking the original source before starting the process turned the experiment into a rather different one.

The next challenge soon followed suit. The full recipe calls for gum ammoniac as another key ingredient. I had not heard of this material before, and thought it was related to animal products because the recipe uses “yellow skin” to describe its appearance. After more research, I learned that it is a type of gum-resin that was used for gilding in illuminated manuscripts.[5] It is not easy to acquire gum ammoniac nowadays, but I was able to find an art supplier in the UK that carries it. While waiting on the shipment, I decided to try another type of gum out of curiosity. I put some chunks of gum arabic into vinegar (Fig. 2). It took around a day for the gum to dissolve, but the solution remains clear instead of turning white as gum ammoniac would have. I then mixed the solution with the eggshell powder I have ground, washed, and dried beforehand, as instructed by the recipe. The result is some sort of white liquid, but it was not ink (Attempt 1, Fig. 3). I quickly noticed that I did not grind the eggshell powder fine enough, as the particles are rather visible, and it floated on top instead of mixed with the solution. After shaking, I could paint with the liquid using a brush, but it does not work at all with a quill. Unsurprisingly, due to the erroneous ingredient and my inexperienced grinding, this first attempt of making the white ink failed. 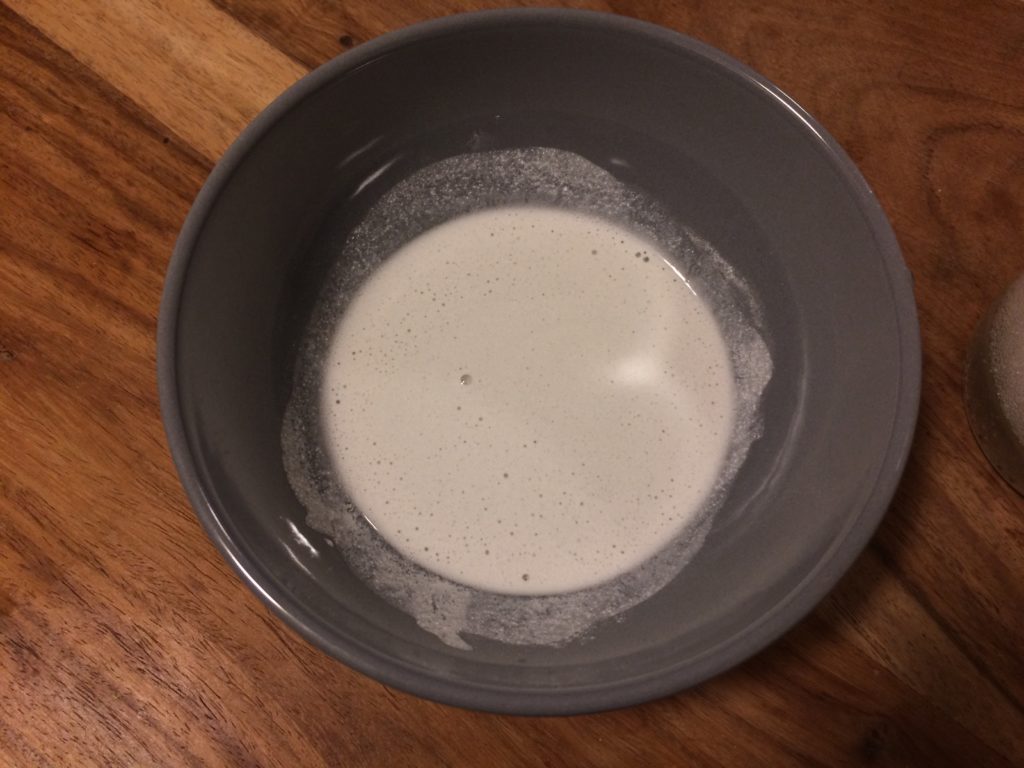 Fig. 3. Some sort of white liquid from the first attempt to make the white ink.

The gum ammoniac eventually arrived, and it made all the difference. Having the gum in front of me, the “yellow skin” description all at a sudden became clear as day (Fig. 4). I followed the instruction to clean the gum while enduring the strong unpleasant odor as its name suggests, and immersed a few chunks in vinegar. The solution started turning white as described shortly after (Fig. 5). I left the solution to steep for a day, and then mixed the white liquid (Fig. 5) with another batch of eggshell powder that was more finely ground than the last try. I made another two attempts to play with different ratios of eggshell powder and solution. The “inks” were more of a light gray than white, but the powder and solution mixed better, and shaking before use was not necessary. Attempt 2 (Fig. 6) was translucent because there was not enough eggshell powder and too much solution. Attempt 3 looked more promising (Fig. 7). The liquid still did not flow through a quill, but writing with a brush resulted a much whiter text (Fig. 6) than the first two attempts. 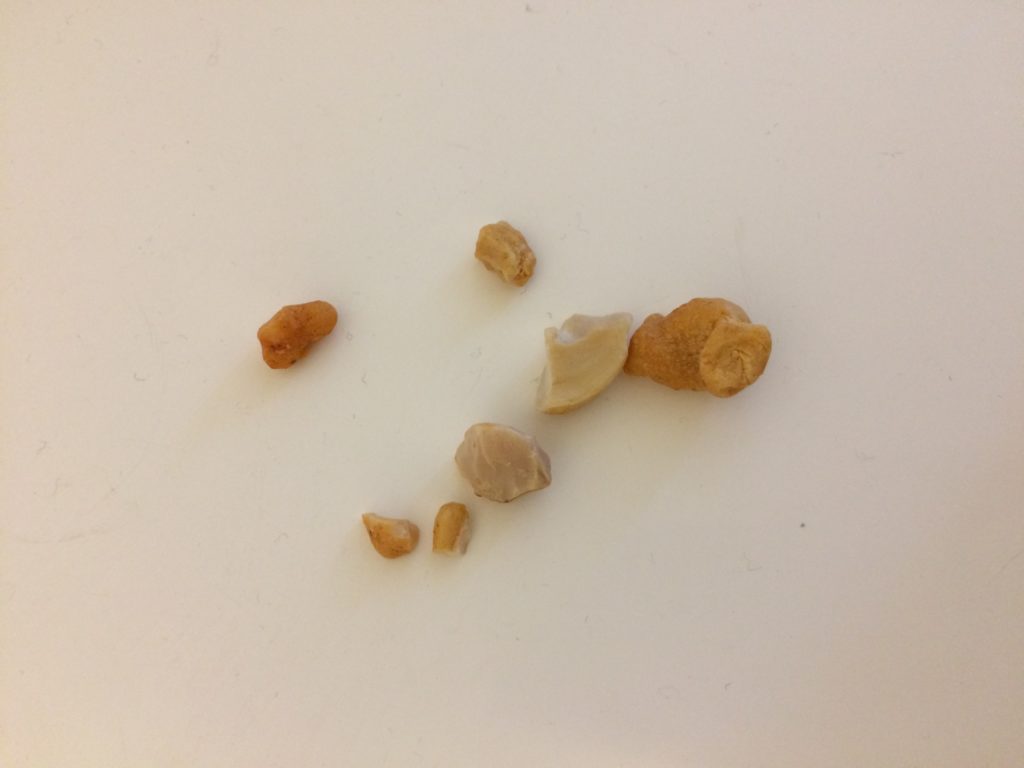 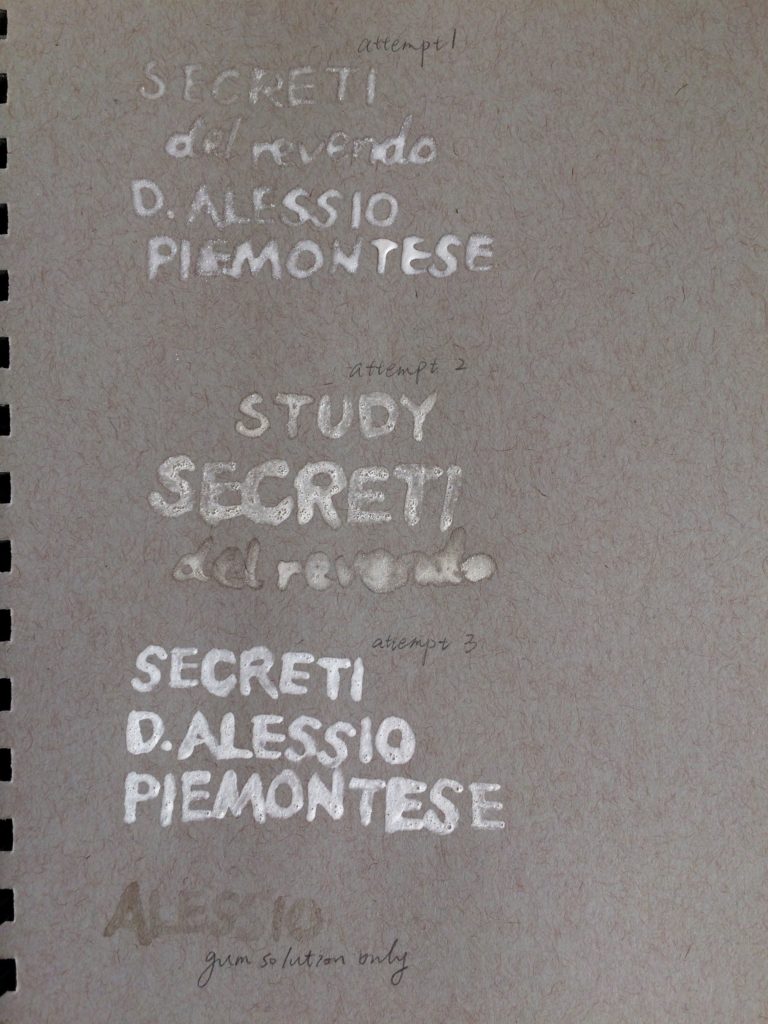 Fig. 6. Results of the three attempts.

The last lesson I learned from this experiment was when to stop and move on. While the third attempt was not entirely a failure, it was not a huge success to produce the whitest ink. I could have continued to figure out how to perfect this process that could lead to a gratifying result: get fresher eggs, make even finer eggshell powder, try different ratios of gum ammoniac and vinegar, the list goes on. However, a “successful” final result is not the purpose of historical remaking. To further engage with this recipe will not bring much more understanding to this process. It does not address the larger and overarching questions I have about historical recipes. My time will be better spent to work on something else, as I have learned from my mistakes, errors, and failures from this particular remaking. There is no doubt that I will make many more mistakes, run into more errors, and experience more failures in future remakings, and I welcome them with my open arms.

[1] For example, a new student initiative, the Journal of Trial and Error, encourages incoming researchers to discuss the struggles in their research, see https://www.jtrialerror.com/.

[3] For an introduction to De’ Secreti and other books of secrets, see William Eamon, Science and the Secrets of Nature: Books of Secrets in Medieval and Early Modern Culture (Princeton: Princeton University Press, 1994); for an impression of the many versions of this book printed in the early modern period, see John Ferguson, “The Secrets of Alexis. A Sixteenth Century Collection of Medical and Technical Receipts,” Proceedings of the Royal Society of Medicine 24, no. 2 (1930): 225–246, https://www.ncbi.nlm.nih.gov/pmc/articles/PMC2182063/.

[5] Gum ammoniac is “a brownish, waxy gum-resin exuding as a milky sap from the stem of Dorema ammoniacum D.Don, but hardening rapidly into brownish ‘tears’, found in Persia (Iran). Used as a ground for gilding in manuscript illumination and also for decorative purposes on leather and other materials; also used medicinally for bronchial infections,” description given in Jo Kirby, Susie Nash, and Joanna Cannon, eds., Trade in Artists’ Materials: Markets and Commerce in Europe to 1700 (London: Archetype Publications, 2010), 452.